Staying Ahead Through Innovation Technology

In 2011, the Group posted a 22.4% revenue growth amounting to HK$6,350 million while gross profit increased by 20.0% to HK$2,330 million. Profit attributable to shareholders decreased by 9.0% to HK$660 million, mainly due to a slight decrease of gross profit margin, an increase of R&D costs and awarded shares expenses. Excluding the exceptional items of higher R&D costs, stock provisions, awarded shares expenses and gains arising from an acquisition, the profit attributable to shareholders would have been HK$920 million. The Board of Directors proposed payment of a final dividend of HK7 cents per ordinary share. Together with the interim dividend of HK5 cents per ordinary share, the total dividend for the whole year was HK12 cents (2010: HK18 cents) per ordinary share. The total payout ratio was 27.3% (2010: 32.4%).

Mr. Tony TL Fok, Chairman of Comba, said, “The PRC telecommunications industry has been experiencing a healthy growth over the years with increasing mobile device penetration and mobile subscriber numbers. Currently, the PRC has the largest mobile subscriber base in the world at 986 million with further growth expected. Benefiting from this favorable business environment, Comba successfully completed a number of network optimization projects in 2011, including projects for the Qiangdao Bay Bridge and the Galaxy Macau resort. We also participated in several benchmark overseas projects, such as the supply of wireless equipment to a LTE network deployment in the Middle East and delivery of equipment to a major OEM customer in Latin America, hence bringing us closer to our aim of becoming the world’s largest wireless communications enhancement solutions provider.”

Driven by the increasing number of mobile subscribers, growing concerns on network quality, the burgeoning popularity of smartphones and a stunning rise in data traffic volumes, mobile operators are shifting their investment focus to enhancing both 2G and 3G networks to provide a better user experience for their customers. As a result, revenue generated from PRC mobile operators rose by 21.4% to HK$5,340 million and accounted for 84.1% of the Group’s revenue. Revenue from the China Mobile Group climbed by 32.8% to HK$3,580 million. Revenue from the China Unicom Group increased by 6.6% to HK$1,330 million. Revenue from the China Telecom Group decreased slightly by 6.0% to HK$430 million. Due to solid demand for wireless enhancement solutions from emerging markets, revenue from the international market and core equipment manufacturers rose 23.3% to HK$850 million, accounting for 13.4% of the total revenue of the Group.

The Group has always attached great importance to R&D since innovative technology is the major enabling factor driving the future growth of the Group. R&D costs increased significantly by 71.6% to HK$360 million, representing 5.7% of the revenue (2010: 4.1%).  This increase was mainly due to expansion of the Group’s leading-edge R&D team and development of new product offerings. As of 31 December 2011, the Group applied for more than 940 patents (31 December 2010: more than 680).

After years of development, rollouts of 4G LTE networks are increasing. The LTE ecosystem development is proceeding full speed ahead, and the second phase of a larger TD-LTE trial network in the PRC is to be launched in the near future. The Group is well positioned to seize these and other market opportunities through its demonstrated capabilities as a leading enabler of next generation LTE networks through the supply of a wide portfolio of LTE-compatible equipment including repeaters, indoor antennas, and combiners amongst other items. Meanwhile, a strong emphasis has been laid upon disaster relief in the PRC in recent years, and the Group successfully expanded its product portfolio to include satellite emergency communication systems providing robust and reliable communications for users in emergency situations such as earthquake, flooding, and fire. The Group believes that such products will become a new driver for its future growth.

Mr. Fok added, “The widespread take-up of multi-mode smartphones has led to the surge of data traffic which in turn drives the demand for wireless enhancement solutions. To meet this market demand, the Group introduced various new products such as the MDAS series during the year which enables multi-mode coverage as well as high-speed data transfer. These products have been well received by the customers and sales have increased rapidly. We believe that such products will contribute to the Group's revenue. In addition, the Group successfully established the wireless access product business division in 2011 and committed substantial resources to R&D projects on femtocell, WiFi and LTE technologies. In particular, the femtocell products have successfully passed a series of online tests and remarkable results have been achieved. Such products expose the Group to opportunities in wireless access and end-to-end solutions where the prospects are promising.”

Mr. Fok concluded, “Comba has displayed its strength in providing quality and reliable network enhancement solutions and has built one of the most trusted brands in the market, as evidenced by our continuing market leadership over the years. Despite the gloomy global economic situation, we remain optimistic about the long-term fundamentals of both the Group and its industry. In the PRC, telecommunications is listed as one of the strategic emerging industries within the Twelfth Five-year Plan and growth in the telecommunications industry is expected to continue with the expansion of 3G and roll out of 4G driving development. Looking ahead, we will continue to provide superior solutions to our customers in order to solidify our leadership position in the PRC market. The Group has already established its presence in the Americas, Asia and Europe, and is making strides towards enhancing its foothold by capitalizing on our long-term partnership with mobile operators. Adhering to our goal ‘Staying Ahead Through Innovation In Technology, Pursuing Excellence Through Effective Management,’ we will strive to generate optimal returns to our shareholders.” 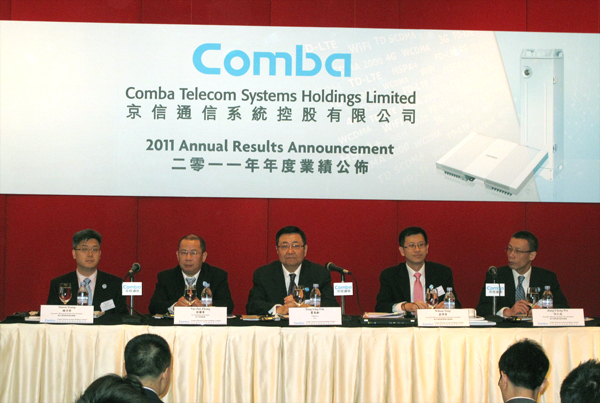