THE DIVIDEND PAYOUT RATIO INCREASES TO 31.4% 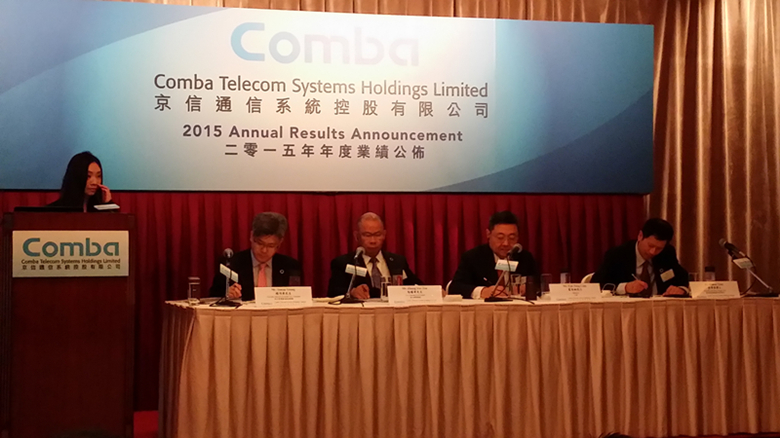 In 2015, the revenue of the Group increased by 0.6% to HK$6,771 million. The gross profit increased by 8.8% to HK$1,914 million and the gross profit margin also increased to 28.3%, mainly due to lower production costs as a result of the enhanced production system. Benefited from the increase in revenue, the continuous improvement in overall gross profit margin, and greater operational effectiveness as a result of a diverse set of effective cost control measures implemented, while the contributions were partially offset by the foreign exchange loss, the Group still recorded a substantial increase in operating profit, as a result, net profit also increased by 40.9% to HK$213 million. The Board proposes a final dividend for 2015 of HK1.8 cents (2014: HK1.3 cents) per ordinary share and to distribute 1 bonus share for every 10 existing ordinary shares held by shareholders.

Mr. Zhang Yue Jun, Vice Chairman & President of Comba Telecom, said, “In spite of the recent turmoil in global financial markets and falling sentiment due to the slowdown in the economic growth of Mainland China, optimism about the mobile telecommunications industry continues amid global uncertainty as the industry continued to operate in a smooth and orderly fashion driven by the evolving digital economy. In the past year, the Group has prudently developed its business and our profitability remained stable. After the business made a turnaround last year, it has continued to improve, demonstrating the Group’s strong capabilities. We believe that as China has started the deployment of 4G networks, combining an increasing number of mobile users and mobile data traffic requiring the gradual expansion of mobile networks and increasing network capability, these favorable factors will substantially facilitate our business growth.”

In respect to its core business, encouraging progress has been achieved in winning some sizeable in-building projects for key commercial buildings, regional conferences and exhibitions during the year in both domestic and overseas markets. Moreover, certain of the Group’s wireless equipment has been successfully included in the main vendor list of the mobile network operators, evidence of the growing importance of wireless equipment in the mobile network supply chain. In addition, Comba Telecom has again been named global "Tier 1 Supplier" for bas station antennas. Four global “Tier 1 Suppliers” collectively accounted for more than half of total global base station antenna market share in 2015. The Group is confident that its global leadership position will remain solid in a long run. Riding on the brand reputation and successful experience in the base-station antennas sector, the Group believes that the Group can develop other product lines to fuel sustainable growth in the future.

Regarding its innovative business, the Group is proactively pushing its past boundaries by developing various highly customized enterprise network communications solution suites to accommodate the specific needs of business operators, such as railway communications solutions, security communications solutions, marine communications solutions, etc. In addition, the Group entered the nationwide indoor location-based service system (“LBS”) business this year and plans to gradually promote its industry application Wi-Fi solutions to dining facilities, recreational facilities, healthcare centers, among others, and to explore more applications scenarios via various marketing channels. Moreover, the Group is taking a stepwise approach to add a new dimension to its product portfolio horizontally by offering new self-developed satellite solutions. It is ready to launch this new product line and will strive to build a presence in this niche area in Mainland China market riding on the synergies with its leadership in wireless solutions. In the burgeoning digital economy, the Group has taken another approach to its digital strategy through combining the best of both worlds by merging IoT and big data analytics, and formulates a series of smart solutions. These smart solutions can be deployed for warehouse management, scenic spot coverage and vehicle data transmission, thereby enabling the enterprises to perform digital storage, wireless inventory management, intelligent scheduling, GPS positioning, intelligent authentication and security functions. The Group expects that “Internet Plus” of the enterprise network will represent a new growth area for the Group.

Mr. Tony TL Fok, Chairman of Comba Telecom concluded, “Despite global economic uncertainties, the Group remains cautiously optimistic about the prospects of the mobile telecommunications industry which is relatively less susceptible to transitory uncertainties in view of the solid demand underpinned by the uninterrupted expansion of the subscriber base, greater demand for superior data services driven by rapid migration to mobile broadband and evolution of the vibrant digital economy. The Group will closely monitor market changes and adjust strategies in a timely manner. In addition, we will prudently evaluate appropriate investment and collaboration opportunities, thereby achieving its goal of ‘Exploring Opportunities, Creating Value, Reforming Mechanism, Enhancing Efficiency’ and mobilizing the Group’s reform engine to raise the overall business to new heights.”